It used to be de rigueur in Silicon Valley to stay out of the way of Microsoft’s product road map – even areas Microsoft hinted they might pursue. Nowadays, venture folks more commonly ask, “What are you going to do about Google?”

The reality of the marketplace is that unless a startup builds a huge community, Google pays only around $50 million for a company (if you’re lucky) and then only if they want to jumpstart a feature by buying a startup.

At this point, Google has trounced Yahoo with consumers. Google expanded its offerings by acquiring several YAW2 (Yet Another Web 2.0) companies with no viable business models, such as wiki software producer JotSpot, Upstartle (maker of the online word-processing program Writely) and of course YouTube. As a result, almost no gaps are left in Google’s consumer portfolio… and no $50+ million opportunities remain for startups other than in “Social Networking,” where Google might buy an existing community such as Facebook (estimates vary between $1 billion and $2 billion).

Which takes us to the Small-to-Medium Business (SMB) market. To grow, Google clearly is going after Microsoft’s SMB business. The chart below describes Google’s current product offerings, many of which have been filled by small acquisitions, with an educated guess as to where they are going in both the consumer and SMB markets. 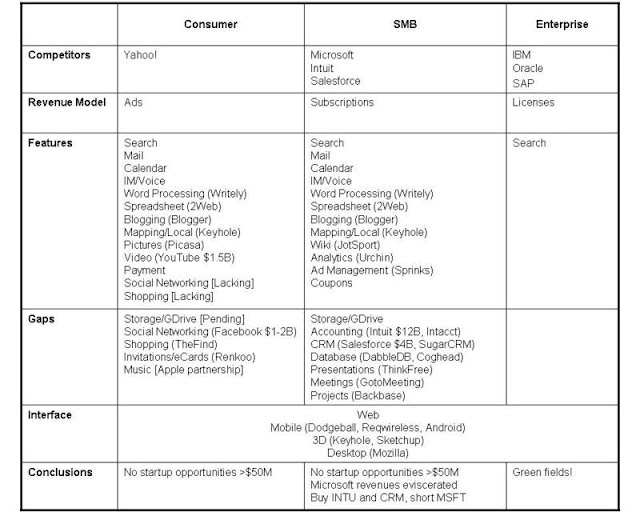 Why is Microsoft vulnerable in SMB? Late to the Internet, Microsoft never really caught up. Its proprietary technology is archaic in a Web 2.0 world where systems can be easily “mashed up,” or tied together with lightweight integration techniques, using open technologies. Microsoft’s Windows Live is a nonstarter.

Within a year or two, companies with fewer than 100 employees will have no need to buy anything from Redmond other than perhaps Windows XP Home; within five years, the same will go for firms with under 1,000 employees.

The critical play for Google, in my opinion, is to acquire Intuit (current market cap of $12 billion). That would give Google a channel to a hosted accounting and inventory system and a majority of small businesses. In particular, the inventory functionality can tie directly into the local business search and mapping engine, Google Local. Also affordable to Google would be Salesforce.com (current market cap of $5 billion), though that’s more of a stretch due to the personalities involved.

Web 2.0 consumer and SMB startups that do not have large communities will be valued at a build vs. buy (i.e. an acquisition that doesn’t cost much) and have a maximum upside of $50 million. After Google’s failed Enterprise Search product, the consumer search giant will leave the enterprise alone for quite a while as it target its guns on the SMB market.

The clearest short-term opportunity for startups to avoid the steamroller is in the enterprise space, which commands relatively high valuations (e.g., 25 times annual revenues for open source companies like JBoss).

Although some may be happy with $50 million paydays after a seed and A round, if you want a shot at making some real money, best to stay out of Google’s way.