How the touch screen is revolutionizing TV

This post was also published on CNET. The recurring rumors about Apple entering the TV set business are at fever pitch, with no less than former Apple President Jean-Louis Gassée recently jumping into the fray and joining the it-will-likely-happen bandwagon.

In short, the TV set is on its way to becoming little more than a monitor that simply displays what's on handheld devices. Think about it: to be interactive, a TV no longer needs a computer built into it.

People are finally recognizing that the long-held idea of how Interactive TV should work--you look up something on the TV screen and interact with related content through some control--has been crushed by the emergence of mobile and
tablet touch screens. Sure, people want to interact--just not with the TV itself.

Nielsen reports that 40 percent of viewers are pulling out their laptops, tablets, and phones while watching TV to peruse the Web, find related content, and make comments on social media. New technology keeps making this more inviting. One example is Yahoo's IntoNow, an
iPad app that recognizes what program you're watching and adds the interactive elements, such as relevant Tweets. 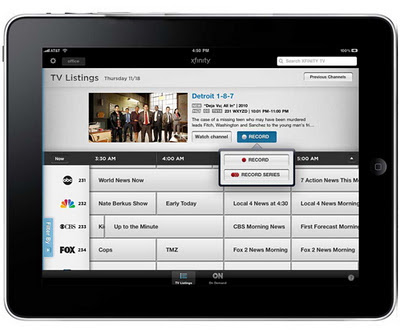 The reason for the transition from interactive TV to simple TV is very simple: a touch interface is intuitive and common, while a TV interface is klutzy. It's almost painful to watch someone navigate a TV screen app using remote control. Even the perennial favorite television "app" known as the onscreen guide has moved to the user's hands, with products such as Comcast's Xfinity iPad app (shown above). New voice-activated technologies like Siri and the TellMe technology, which is integrated into Windows Phone handsets, will let you to talk to your handheld device to control your TV.

And increasingly, people are streaming the content from their mobile devices to their TVs, using technologies like Apple's AirPlay and the industry standard DLNA. This could be paid on-demand programming from iTunes, paid apps with content, such as my company CBS' "60 Minutes" iPad App, or YouTube videos. Essentially, anything you can see on your phone or tablet will soon be instantly viewable on your TV, just as if it were a computer monitor.

At the last CES conference, Vizio demonstrated a technology that will transfer a video being viewed from an Android device to the TV, rather than rebroadcasting the video the way Apple's AirPlay works. So once you decide to watch something, the TV will take control and download the content itself, and you can go back to using your handheld device to do other things without having to bear the battery and bandwidth of getting the content from the Internet and re-streaming it to a TV.

Now that TVs are becoming increasingly bound to mobile platforms, a successful product offering must be part of a tightly linked stack that includes mobile devices, apps, developers, and cloud services. These requirements leave us with just the three usual suspects: Apple, Google, and Microsoft.


While Google, Amazon, and Microsoft have leading cross-device platforms, Sony and Amazon are the dark horses here. Sony CEO Howard Stringer has said that Sony is developing Apple-like television. Sony recently struck content streaming deals and it's trying to reclaim its mobile business from Ericsson Sony should consider bundling its PlayStation 3 into its televisions to get a leg up here rather than embedding yet another Linux-based content OS or Google TV.

Amazon has a large streaming business, a "rekindled" mobile strategy with its new Android-based Kindle, and relationships with TV video devices like Roku. Amazon could acquire Roku and tie it to the Kindle in order to have a competitive offering.

The upshot of all this? TV is becoming more relevant in the age of handheld computing -- and that's a plot twist no one had expected.