You say Google+ is a ghost land? Time to revisit that one

The company has taken repeated hits in the press, but Google+ is fast becoming a social business for small businesses.

Compared with Facebook or Twitter, Google+ can seem like a veritable ghost land. I'm finding few posts from friends or interesting people on the service. And it's not just anecdotal observations of there being slim pickings. A recent report by RJMetrics found weak user engagement with the social network. And yet Google+ claims to have an ever-growing number of users. So how has it managed to pull off that neat feat?

The not-so-apparent fact is that Google has aggressively integrated its social network throughout its properties, thus driving users to unwittingly use Google+. This is particularly true of Google+'s pages for small businesses, also known as Google+ Local.

For instance, when users search for a small business, Google automatically showcases that business on the right side of the page, as part of its Knowledge Graph initiative, which provides aggregated "answers" in addition to search results. 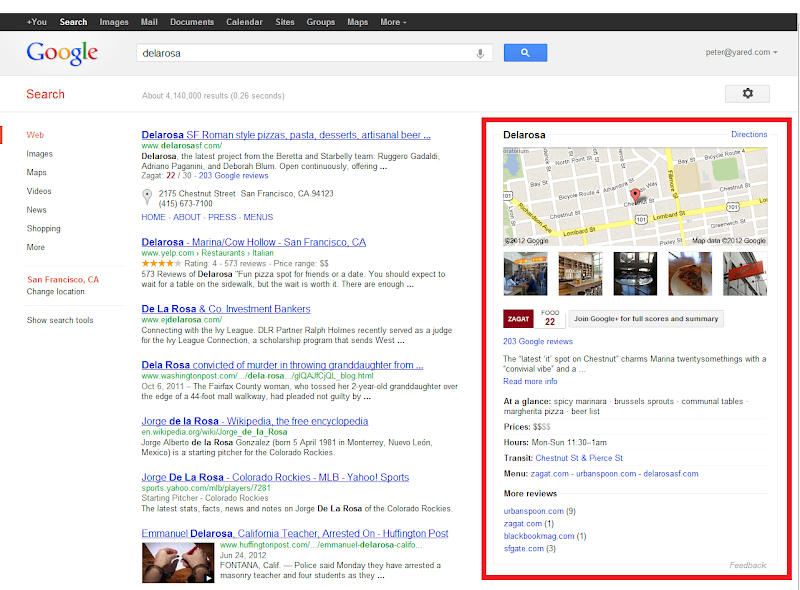 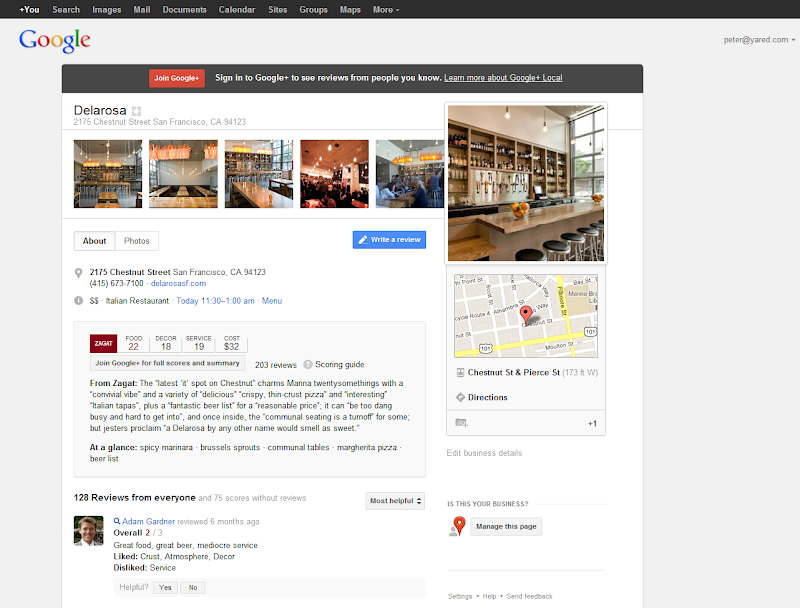 Pundits opine about how Google is becoming a content company with its various acquisitions. However, Google could, in fact, simply be attempting to juice its local listings. And there's no shortage of material it can tap into.

Google is integrating local business reviews from its $125 million Zagat purchase, and will likely soon integrate additional content from its recent $23 million acquisition of Frommers. A $148 million investment is chump change to Google on its road to better capture the small business market. Consider that at one point in time, Google wanted to pay a reported $6 billion to acquire Groupon to address the same market.

Rather than becoming a content company, Google is taking a different tack by providing a service to its customers. In fact, Google has long provided services to small business advertisers. Providing them with a landing page that allows users to subscribe and be reached, social network style is an obvious next step that meets both the needs of advertisers and users.

Review sites like Yelp are built on the back of a user searching Google for a local business and then clicking on a Yelp search result. In that interaction, Yelp gets most of a user's attention. In the new model, with the Google+ result to the right, the Google+ page for a business gets most of a user's attention. When Google tried to include Yelp review excerpts in Google Places, Yelp lobbied the FTC to prohibit Google from including its content. While Yelp is unhappy, it could be said that Google is much more advertiser-friendly than Yelp, considering the number of small businesses that are unhappy with Yelp's aggressive sales tactics.

Google's acquisition of social-marketing company Wildfire isn't a nefarious attempt to infiltrate Facebook marketing. Instead, view it as an additional step in its strategy of connecting small businesses with users. Wildfire's self-service promotions platform is widely used by small businesses to deliver sweepstakes, coupons, and other marketing promotions. On top of that, Facebook's Timeline update has significantly reduced promotional opportunities on Facebook business pages, incentivizing businesses to look at alternative profile pages that can offer similar features.

Google+ has rapidly become the business social network, differentiating itself from LinkedIn as a promotional and communication network rather than a public directory of employees. (Google just announced Google+ features for medium to large businesses.) Google+ is already a great place for small businesses to create an online presence that gets a lot of traffic and provides users with context such as reviews and location. It will likely soon let users opt-in to a business' "circles," then allow businesses to shoot promotional material straight to a user's Google+ inbox, also known as Gmail. Now that's a winning small business strategy.