Android challenges the iPhone in every category

This post was also published on CNET and VentureBeat.

The new breed of Android devices exceeds the iPhone 5 in every way, including hardware, operating system, and apps. 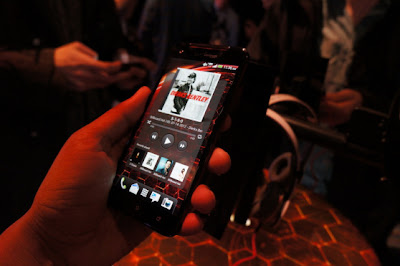 For the past month, I have been using an HTC Droid DNA, which has similar specs to the rumored upcoming Samsung Galaxy S4. People approach me at grocery stores, airports, coffee shops, even on the street and ask me about the phone. The device is indeed quite compelling, even from a distance.

The HTC DNA has an amazingly bright 1080p HD display with a higher resolution than Apple's iPhone 5 Retina display. The operating system is modern with dynamic widgets that tell you at a glance what's going on. The apps such as Facebook, Twitter, and such are equivalent to those available to iOS, and Google Apps such as Google Now, voice recognition, and Google Maps are sleek and modern. This is hands down a better device than the iPhone 5, and people seem to intuitively recognize it.

What phone would I recommend for my mom? An iPhone. It's safe, predictable, and uniform. What would I recommend for anyone under 40? Definitely one of the new breeds of Android phones. Android might still be a bit quirkier than an iPhone, but it's definitely not confusing for people who interact daily with a variety of advanced technology. Samsung really nailed it in its commercial where a young woman is waiting in line for a new iPhone and it turns out she is holding the spot for her parents.

The new breed of Android devices exceed the iPhone 5 in every category -- hardware, operating system, and apps.

The spec is alive and well -- and killing Apple

Hardware from Samsung, HTC, LG, and others has now caught up and eclipsed Apple's devices. Smartphones don't really have that many specs to evaluate, and each of the specs actually means something tangible to an average consumer. After five years of advanced smartphones, specs like screen size, screen density, screen brightness, camera speed, camera megapixels, physical dimensions, physical weight, amount of memory, and battery life are easily understandable and relevant to even the average smartphone consumer. Even specs like the number of processor cores and speed that are typically not easy to understand are easily understood when framed as "faster than the iPhone 5."

Conversely, the spec is definitely irrelevant when purchasing Apple products. There are so few products to choose from that decision making is essentially boiled down to a Goldilocks-style small/medium/large decision mainly driven by cost rather than actual features. While this is great for my mom and MG Siegler, the lack of spec-based decision making is not necessarily a good thing in a world where consumers actually understand each of the specs and would like to choose how to balance them out relative to cost. Apple has been a follower on many specs, particularly in terms of form factors, trailing the market in both 4-inch phones and 7-inch tablets.

iPhones are definitely gorgeous devices, but they are relatively uniform and monotone. Aluminum is definitely great. Conversely, I was surprised by how many women commented on the red accents on the HTC DNA, which are part of the DNA's crossbranding with Beats Audio. People like colors and variety, and they don't necessarily like having to completely cover a phone's shell and make it bulkier in order to express themselves.

Let's not forget that all of those Samsung Galaxy phones you see cost the same as an iPhone -- their owners are not bargain shoppers; they are spec and style shoppers.

The screen should actually show you something!

But the real standout for Android is the customizability of the display. Rather than iOS static icons with embedded notifications, with Android, apps are front and center, displaying the time in different time zones, the weather, appointments, emails, texts, whatever you want in numerous themes that can completely reinvent the user interface.

Windows Phone 8, the dark horse in this race, is actually even more integrated, with a unified messaging interface that consolidates emails, texts, and Facebook messages into a single thread, and a consistent tile interface with which apps can display information on the home screens.

The operating system is not as important as the apps, and this is where Android is beginning to shine.

The cloud behind the app is more important than the app

In a world where the hardware and operating system have become commoditized, the apps are the differentiator, and more and more, the apps are a viewport into a cloud service driven by machine learning.

The vast majority of Internet users rely on Google Search, Maps, YouTube, Mail, and such, and spend more time in those apps than in the mobile operating system itself. As people are beginning to note, Google's apps are way better than Apple's. What good is Siri if it thinks "Hurricane Sandy" is a hockey team, when Google knows what's actually going on? Google Now is adding ambient awareness to Android devices, letting people know what's going on around them and what they need to do in a very personal way, with features like a notice that you need to leave for your next meeting because there is now traffic en route.

Perhaps, as is rumored off and on, Apple will start snapping up cloud services such as Waze. However, it is hard to buy and integrate a new type of product category into a large company that doesn't have it in its DNA. Competing with Google, an entrenched, dominant player in machine intelligence that recently added Ray Kurzweil to its roster is going to be a challenging affair. Microsoft actually had a better track record of delivering large-scale cloud services, such as mail, mapping, and storage, than Apple.

Beyond Google's apps, the reality of the app market is that all of the applications that matter are now on Android, and it actually will soon have more apps than iOS. Dan Lyons of ReadWrite is lambasting the Silicon Valley tech press for living in an iPhone echo chamber, and he does have a point. Pundits are lauding Google Maps features on their iPhones that have been available on Android devices for literally years. Bloggers breathlessly reveal new Facebook iPhone app features such as "Find Friends Nearby" that had been available for over a month on Android.

The feedback loop of the echo chamber is that developers initially develop apps on iOS, much like the recently popular Cinemagram. However, developers like Rottmann like cool devices, and are starting to shift over to Android. In addition, developers are feeling limited by iOS user interface patterns and its skeuomorphic apps and are branching out. Like the Mac OS of the early '90s, the consistent UI across applications will likely splinter.

The numbers speak for themselves. Android has a 75 percent smartphone worldwide market share, as evidenced by the hordes of Samsung devices in use throughout Europe and Asia. While Apple is regaining market share in the U.S. with the iPhone 5, it is about to face an onslaught of 5-inch Android phones with specs that far exceed the iPhone 5's. Wall Street clearly sees a shift coming, and has hammered Apple's stock price over the past quarter.

The average consumer has moved past the days of pious, scruffy haired, unshaven, thick glasses-wearing dudes lecturing us on how Apple is so cool. Perhaps soon Silicon Valley will catch up. When you see someone in a cafe with a MacBook Air, iPad, and iPhone on the table in front of them, is "Think Different" really what comes to mind?