If 87 Unicorns fell in the valley, would they make a sound?

A lot of noise has been made about the inflated valuations of Aileen Lee’s unicorns and the amount of money they have raised. There are rumors that uber-unicorn Uber is now raising an additional $1 billion, in order to continue to fuel growth financed by losing a rumored two dollars for every dollar in revenue. On the one hand, that seems irrational; but on the other hand, loss-fueled growth is how companies like Amazon became the behemoths they are today.

In the broader context of Silicon Valley technology companies, the unicorns in aggregate form barely a ripple in the fabric of space-time. According to CBInsights, there are 87 Unicorns in the United States, with a combined valuation of $312 billion. Cross-referenced with Crunchbase, those 87 have raised a cumulative $48 billion, with over half of that amount invested in the top 14 unicorns. 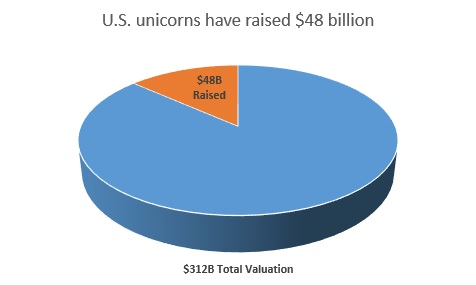 What if all of these unicorns vanished to Candy Mountain tomorrow? What would the ramifications be across the various ecosystems tied to unicorn mania? $48 billion is a lot of money to lose, even for the well-funded and diversified investors that have poured money into unicorn mezzanine rounds. However, consider that Fidelity, TPG, and T. Rowe Price alone manage over $6 trillion in assets, so even if they had invested half of what has been put into the unicorns, it would be less than half a percent of their assets, well within the volatility range of their much more stable asset classes. These asset managers are much more concerned about Chinese power consumption data than they are about unicorns returning to mythology.

The late stage unicorn investors, which traditionally invest in tech IPOs, have put anti-dilution and liquidation preferences into these private rounds, ensuring that they will very likely get their money back out at a minimum. The founders, early stage VCs and executives have sold portions of their stakes for cash in these rounds and in secondaries. VCs can complain about overinflation and Kind bars being handed out, but is it really out of altruism for the startups, or because they are shut out of the early stages by Angelist and micro-VCs and the later stages by hedge funds and public market investors?

If the asset managers aren’t biting their nails and wringing their hands about the future of these unicorns, what about the general technology sector? To put the $48 billion invested into unicorns into the technology sector context, consider that two months ago, during the Chinese market jitters, Google’s market capitalization plummeted $54 billion in a week. Google’s investor exposure is more similar to the dot com, with main street investors in the stock. The world did not end. Rent prices in San Francisco did not plummet. Kind Bar inventories at Whole Foods and Safeway did not explode. In the grand scheme of things, it’s just not that much money. 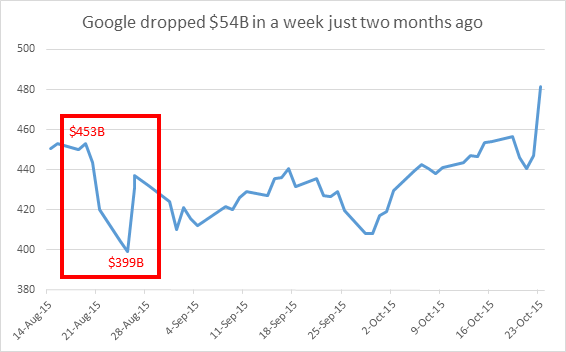 So who could potentially lose here? If investors, founders, and the general technology business isn’t impacted, who is? The employees of unicorn companies who were enticed to startups with multi-billion dollar valuations. There is a good chance many will get squeezed down as the inevitable “IPO is the new downround” public offerings happen when some unicorns fully tap out private markets. But how many people will that actually impact? Even if all the unicorns are forced to rightsize and lay off staff, they are still startups and likely employ fewer people in aggregate than the 33,000 employees HP just announced it will lay off.

There were 39 unicorns when Aileen Lee wrote her original article in 2013. There are now over 140 unicorns worldwide. Some unicorns have hit escape velocity. Others seem more like they are headed to the endangered species list once fundraising windows close and their business models are exposed. Either way, the large late stage investors who have put multiple bets on the roulette table will come out unscathed, so perhaps the unicorn angst is isolated to the Silicon Valley echo chamber.