In the week since its launch, Facebook Messenger’s bot platform has seen a litany of complaints, with users arguing that it is tedious and unusable. The reality underlying the feedback is that natural language processing isn’t ready for prime time. The techies at Facebook Messenger clearly recognize this fact and have a few tricks up their sleeve that are very old school and reminiscent of the simplified HTML in Facebook’s app platform from almost a decade ago.

Artificial intelligence experts are indeed pursuing systems that pose as humans and can pass the Turing test, but companies attempting to sell flowers or airline tickets are fast realizing that even specialized bots are incredibly difficult to create. The bot platforms are providing tools like Facebook’s wit.ai and Microsoft’s cognitive services to make creating interactive bots easier, but it is going to take years for these specialized bots to become truly interactive.

Even if that interactivity problem were fixed, it is still incredibly tedious to go back and forth with a bot to do anything even somewhat complicated such as purchasing a plane ticket. Using such as simple interface is reminiscent of calling an airline and having to use their TellMe voice recognition systems to go over every detail of a flight.

Slack, one of the first in the generation of bot platform, relies on “Slash” commands reminiscent of DOS command prompt. Yes, if you learn the syntax, it works, but how many people are going to bother mastering the syntax?

Some evangelists in the bot space are saying that at some point humans will have to take over a conversation in order to complete a transaction, which is quite silly when apps and websites have already made it so that you can perform all of these activities without engaging a human.

Facebook Messenger is bypassing the uncomprehending bot problem by providing “rich bubbles” that provide interactivity directly within the messenger. Most in the industry call the equivalent functionality “cards” – small interactive units where users can make choices, swipe for more information, and click or tap on actions. Google made cards pervasive years ago by putting them directly below search queries such as “san francisco weather” and “flights from sf to la”.

So while the Facebook Messenger bubbles are still quite clunky, their evolutionary path has been well trodden by Google: interpret a textual query and provide an interactive unit in response. 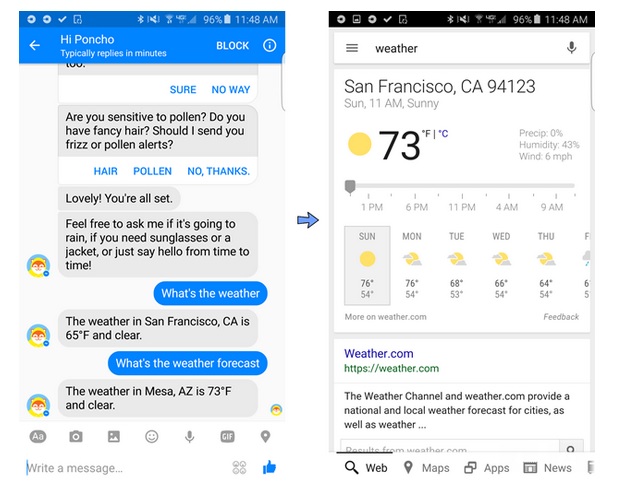 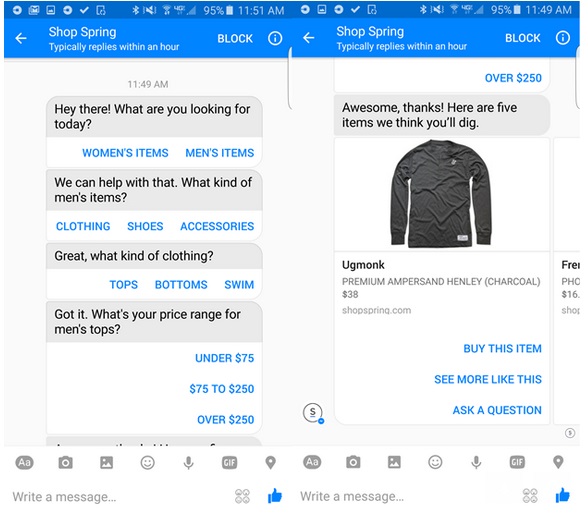 Facebook Messenger is still a very nascent experience. The conversational interface is unusable and will likely remain so for the foreseeable future. However, the “rich bubbles” are well set up to provide an interactive, iterative way to help users find the information they need.

Facebook will likely expand this functionality to full Micro Apps that can load into the Messenger, with games delivered via React Native and apps delivered in this new HTML subset reminiscent of the FBML language Facebook used in its initial platform. All in all, this is an exciting development with far reaching implications for developers that are getting lost in the Apple iTunes and Google Play app stores.