This post was also published in VentureBeat. Yes, Microsoft is a slow, lumbering giant. It has been working on cloud for years, with numerous iterations, that took so long cloud proponent Ray Ozzie got fed up and left. Microsoft had to work through cannibalizing reseller arrangements, reconciling how to reach consumers versus businesses and a host of other issues. With Office 365, Microsoft has finally delivered an end-to-end cloud platform for businesses that encompass not only its desktop Office software, but also its server software, such as Exchange and SharePoint.

Contrary to Google’s narrative, cloud based office software is still a wide open market. The three million businesses that have “Gone Google” — proclaimed on billboards in San Francisco airport’s new Terminal 2 — are for the most part Gmail users, who are still happily using Microsoft Office and even Microsoft Outlook. Gmail is a fast, cheap, spam-free and great solution for business email, especially relative to the expensive, lumbering email service providers. Google Apps has definitely found a niche for online collaboration, but generally for low-end project management types of spreadsheets and small documents. The presentation and drawing Google Apps are barely used.

Yes, there are definitely Google Apps wins, since it seems cheap. On implementation, businesses find that switching to Gmail is one thing, but switching their entire business infrastructure to Google Apps is a completely different animal that goes far beyond simply changing how employees are writing memos.

Imagine you are a 25-person law firm in Kansas City running Microsoft Office, Microsoft Exchange for email and calendaring, Windows Server for file sharing, SharePoint for wiki/collaboration, and have a custom billing application written in .Net and running on Microsoft SQL Server. Like the majority of small to medium-sized businesses, you are an all-Microsoft shop.

Google comes in and presents: Google Apps looks primitive and doesn’t have all the features of Word and especially Excel and PowerPoint. It also doesn’t work offline. Email and calendar is sort of the same, but you should really use a browser instead of Outlook to get full functionality. Plus, you have to manually move all of your SharePoint content over to Google Sites, the file server isn’t integrated with the Windows or Mac desktops, and you have to keep your .Net app the way it is or rewrite it into Google AppEngine.

Compare this experience to the Microsoft value prop: go home on Friday, and on Monday when you come back everything will look the same, except now we are hosting it all and you can lay off your IT staff. There’s no training required. Employees can run apps on the desktop or in the browser, whichever they like, and the browser version looks like the desktop version, only cheaper. For a regular business where technology really is just a pain and an expense item — not a mission in life — it’s really a no-brainer. In addition, Microsoft has historically been very smart about seeding nonprofits and educational institutions with copies of software that are virtually free, which it will likely also do with Office 365. 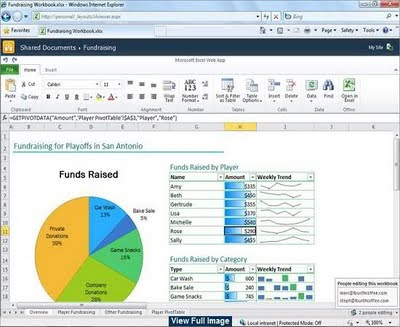 The thing about Microsoft Office 365 is that it looks really good, and looks and act just like the well-known native Office apps. The ribbon interface is intuitive and the apps are fast and responsive. Google Apps, conversely, looks like it was made by college students from a weekend project. I don’t understand how Marissa Mayer loves fashion like Oscar de la Renta at night, but goes to work during the day and insists on data-driven web sites that look like crap. Google hasn’t shipped a good user interface since Google Maps. The different between Office 365 and Google Apps is glaring.

Microsoft definitely has a few issues to work out. As Google pointed out, collaboration is not very simple, since you have to be a Microsoft Office 365 subscriber in order to collaborate. However, Microsoft already launched Docs.com, a free Office offering with free collaboration. Microsoft will likely integrate Skype into Office 365, which will offer chat, audio and video conferencing, screen sharing and (probably) free document collaboration based on Docs.com.

Google’s claim that Office 365 doesn’t support many platforms is moot. It works fine on my Mac OS X with Chrome, and officially supports Internet Explorer, Safari and Firefox. Office definitely has numerous pricing tiers. The lowest tier is on par with Google Apps and the higher tiers include subscriptions to the desktop software, which help to transition Microsoft from feature-driven bloatware to subscriptions — a model that has worked for Adobe.

Google Apps will definitely have a place for new businesses and small businesses with younger employees that aren’t tied to the Office user interface. Google App Engine is a hidden jewel within Google Apps and its hands down the fastest solution for programmers to create and deploy a comprehensive web app. However, with Office 365, Microsoft is clearly on a trajectory to continue its Office hegemony. Microsoft is much more concerned about Apple than Google at this point, and insuring that it monetizes Apple devices like it used to make more per Mac than Apple did in the early 1990s. Conversely, Google should be much more concerned about Microsoft, which now has almost 30% marketshare in search.