This post was also published in VentureBeat. You know a web service has reached massive scale when it can charge brands to reach their own customers. Google has been doing it for years, Facebook has been doing it for the past couple of years, and now Twitter has just entered this hallowed territory with its new promoted tweets feature, which lets brands keep their tweets alive in your stream only if you have already followed that brand. The irony here is that you are only seeing these promoted tweets if you already followed that brand – so the brand is paying to advertise to users that already like it.

Now if advertising is usually about getting new customers, why would brands pay to market to their existing customers?

Many years ago, Google had a stroke of genius: to put ads above the search results and then charge brands to own the top spot where the brand inevitably would have been the first result. So when people search for BMW, BMW does not want Mercedes getting the top spot, so it buys placement. Nowadays, it is part of most every brand’s AdWords buy to purchase their own name. MarkMonitor, the digital brand protection company, reported last week that in sectors like finance and travel, nearly half of the ad buys are on the competition’s keywords. Although Google technically does not allow the purchase of trademarked keywords, the practice has become so widespread that some brands such as American Airlines have sued Google. 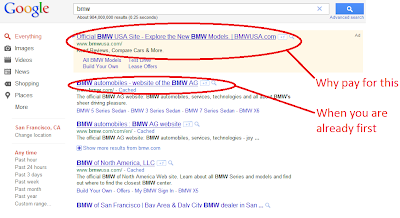 Facebook then jumped into the fray with its brand pages. First, a brand has to get “Fans” by getting people to “Like” its page. This is accomplished by special ad units on Facebook called Page Ads. Other options include “Like-blocking” an app on a page so that a consumer has to Like the Facebook page in order to get access to exclusive content, sweepstakes or deals. Once a consumer has Liked a Facebook page, the brand can then purchase additional Facebook ads such as Sponsored Stories targeting users that have liked its page, as well as the friends of the user that have liked its page. In effect, the brand is paying to advertise to users that have already said they liked it.

Twitter is following the Facebook model. First it charges brands to be a Promoted Account, which puts a brand in the “Who to follow” box on the Twitter homepage. Then, a brand has to buy Promoted Tweets, so that its message doesn’t get lost in the endless stream of tweets. Again, paying to advertise to users that have already said they liked its brand.

Over the past four years I have run numerous social marketing campaigns for big brands as the general manager of the social marketing platform Webtrends Soicial. We see a 7x increase in clickthrough rates when brands target their own fans on Facebook. Comscore recently released a report showing a 10% friend drag along for brands such as Starbucks, Southwest and Bing. I imagine Twitter will soon add the ability for brands to advertise to people following its followers, just like Facebook lets you advertise to friends of fans.

As I wrote in VentureBeat a couple of months ago, sending advertising to your existing users is akin to email marketing. A Promoted Account is the same as an email opt-in, and a Promoted Tweet is the same as sending your customers an email. Just a lot more expensive.

Very few companies have achieved the scale to charge brands to reach their own customers, and Twitter is now one of them.