The verticalized enterprise stack: why HP needs to merge with SAP

HP has had to face tough realities this week. Fortunately, there is a way for it to survive: Embrace the inevitable trend favoring “vertical” companies.

In the first part of the 2000s, IBM and HP went in two vastly different directions: HP acquired Compaq to bolster a horizontally-integrated PC business, while IBM sold its PC division to Lenovo and focused on creating a vertical stack of enterprise products.

In the early 2010s, HP’s decision to attempt to dominate PCs has come back to haunt it. Even though HP is the number one PC seller, the low-margin business doesn’t pay, so the company is exiting both the desktop and mobile consumer computer business.

Now HP needs to act fast to remain competitive in the enterprise.

Earlier I described how the consumer computing business is consolidating based on the “rule of three” economic theory and that three big players would dominate the industry: Apple, Google and Microsoft. To play in this market requires a full vertical stack, offering customers everything they need from hardware to applications. Competitive companies will need the ability to extract efficiencies between and from each layer: mobile operating systems, mobile devices, desktop operating systems, personal computers, web browsers, productivity applications, content distribution and cloud services.

Given the vertical integration required to play in the consumer computing business, it is no surprise that HP decided to exit. In order to compete, HP would need to build out cloud services, a desktop operating system, and more. Microsoft, with its domination of the desktop PC and productivity applications businesses, has already spent years and billions of dollars filling its gaps, and will continue to spend billions until it wins the number three spot. HP, and in particular its raucous shareholders, have neither the financial gumption nor a base of technology for an attempt to be the number three in the consumer market.

So it is a wise move for HP to exit the consumer computing business and focus on its enterprise business. However, HP is jumping out of the frying pan and into the fire, as IBM, Oracle and Microsoft have been aggressively building integrated enterprise stacks over the past decade. The rule of three is applying itself to the enterprise space as well, and HP is getting left behind.

The importance of owning every piece of the stack is increasingly critical. When Oracle decided to end support for the Itanium processor, HP had no database of its own to fall back on and resorted to suing Oracle to support its platform. Both IBM and Oracle are optimizing their databases and middleware to run super efficiently on their respective operating systems, processors and storage. IBM started the verticalized enterprise trend in the early 2000s by widening the memory bus to its PowerPC machines in order to extract more performance out of its DB2 database, forcing Oracle to acquire Sun in order to match database performance.

IBM and Oracle verticalizing enterprise software and hardware is much like the consumer verticalization. Apple’s ability to create efficiencies by building its own iPhones and iPads is a big part of what forced Google to acquire Motorola Mobility. HP board member Marc Andreesen may be right that software is king in his new cloud investments like Facebook and Zynga, but in the hardscrabble world of enterprise and consumer computing, IBM and Apple have verticalized software and hardware and clobbered HP in both the enterprise and consumer markets.

So how will HP build a complete enterprise stack? HP’s acquisition of Autonomy is a great start and fills the gap in enterprise search to compete with IBM’s OmniSearch, Oracle’s Secure Enterprise Search and Microsoft’s FAST. However, HP still has huge gaps compared to its competitors, including collaboration software, business applications, analytics, middleware, and database. 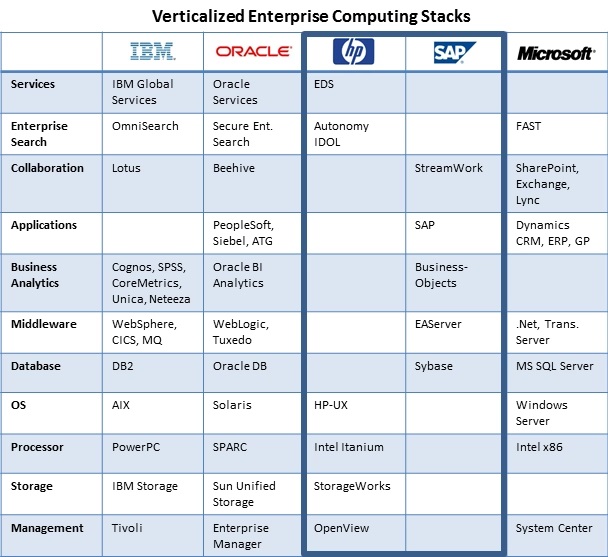 HP’s gaps are perfectly filled by SAP. And SAP’s gaps in services, enterprise search, operating system, processor, storage and management are all filled by HP. A merger of SAP (valued at $60 billion) and HP (valued at $49 billion) would create a $109 billion behemoth capable of competing with IBM ($188 billion), Oracle ($125 billion) and Microsoft ($201 billion). Large mergers like this can be a disaster, but HP’s CEO Léo Apatheker used to be the CEO of SAP and worked there for twenty years, so there is one person who actually knows both organizations.

HP needs to move fast. HP should dump its printer business along with its other low margin hardware businesses, merge with SAP to get a full stack, and then go on a shopping spree to shore up the weaker parts of the combined HP-SAP stack such as EAServer, StreamWork and HP-UX.

We are about to see a scrum amongst all of the larger enterprise players to acquire companies at every layer, such as TIBCO, Teradata, Jive, Salesforce, Red Hat, and likely even my own company, analytics vendor Webtrends. Microsoft may even take another try at Intuit now that it is no longer a monopolist.

Otherwise both HP and SAP risk losing the third place in the rule of three to Microsoft. It should be noted that despite its detractors, Microsoft has actually had amazing execution over the past decade and is the only contender to hold its own in both the consumer and enterprise computing stacks.

HP and SAP need to stave off Microsoft as the small- and medium-sized business enterprise player, or they will both wind up being carved up and bought by IBM and Oracle.