Will 2011 be the year online video unravels the Internet?

This post was also published in VentureBeat.The explosive growth of online video over the past couple of years has begun to unravel the way both businesses and consumers have used and paid for Internet access over the past decade. Although past Internet growth has been exponential, the deluge of video that is coming in the next decade has already forced a series of legal, regulatory, and business disputes that have set the stage for significant changes for the next decade of video on the Internet.

A lot of this has been talked about in the lofty intellectual framework of net neutrality, which advocates present as the principle that providers of Internet access should not discriminate between types or sources of traffic on their network. But what it really comes down to are a new set of business arrangements for who will pay to get the bits from point A to point B. A host of developments in the past year have set the stage for major battles over bandwidth in 2011.

Comcast had already effectively worked around the FCC decision by capping consumer consumption to 250 gigabytes, a relatively large amount of bandwidth that most consumers never came close to reaching. However, with the advent of HD streaming from Hulu, Netflix, iTunes, Amazon.com, and others watching 100 hours of HD video, or just 3 hours a day, can exceed that cap, prompting many “over the top” users to transition to more expensive “business class” plans that do not cap bandwidth.

Right before the Christmas holiday, the FCC issued a description of an upcoming set of rules regarding net neutrality for service providers. Wired broadband providers such as Comcast and Time Warner could no longer “unreasonably discriminate” against competing content providers like Hulu, but they could theoretically still discriminate against bandwidth-hogging protocols like BitTorrent.

In a King Solomon-like decision, the FCC also decided that wireless providers like AT&T and Verizon Wireless could definitely discriminate against particular protocols and apparently even particular providers such as Hulu, although this aspect is not completely clear until the full rules are published early next year. Most wireless providers had already capped their “unlimited” data plans earlier this year in response to the increasing consumption of video on their networks.

This FCC decision to allow discrimination on wireless neworks set the net neutrality community into a holiday-season tizzy. Despite the uproar, it has to be argued that since bandwidth is indeed limited on wireless networks, allowing providers to discriminate was a reasonable decision.

At some level of bandwidth, even net neutrality advocates cave. I had a funny exchange with a prominent net neutrality advocate earlier this year after he had posted on Facebook that he was using GoGo, the inflight Internet-access provider, on a plane. “Aren’t you glad GoGo caps your neighbors from sucking up all the bandwidth with Hulu and YouTube?” I asked. “This is different,” he responded.

The FCC thinks that wireless networks, too, are different, with inherent limitations in bandwidth. So it ruled they can discriminate in order to maintain predicable service, although the may revisit this once fourth-generation, or 4G, wireless technologies like WiMax and LTE get larger penetration. 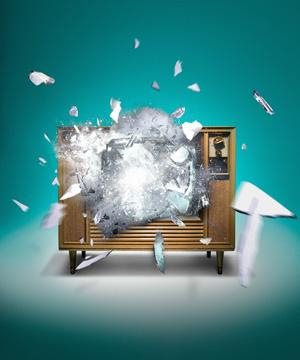 While most of the fuss was about the legal landscape, the biggest video salvo came on the business front in late November, when Level 3, an Internet backbone provider that had recently entered the content delivery network business through its acquisition of Savvis’s operation, publicly complained that Comcast was attempting to extort large fees in order for Level 3 to deliver Netflix’s video streams to Comcast customers.

Level 3 claimed that Comcast was doing this in a discriminatory manner in order to promote its own competing Fancast property and its soon to be acquired stake in Hulu via the Comcast acquisition of NBC Universal. Comcast in turn argued that it was simply charging for a standard “peering” arrangement in order to deliver a vastly increased amount of data from Level 3, that Level 3 had underbid to win Netflix’s business and was trying to have Comcast, in essence, subsidize its contract.

For many readers of VentureBeat who invest in or operate Internet businesses, the practice of paying to serve content on the Internet is well known. The more successful a company is at distributing its content, the more it has to pay in hosting bills. All the main hosters used by startups and large companies alike, ranging from MediaTemple to Amazon.com to Rackspace tier their prices based on the number of bytes sent out.

Why do content companies have to pay by the byte sent if the Internet is “free”? Because, in fact, the hosters in turn must pay to plug into various backbones, and they pay by the amount of traffic they are sending upstream, and deduct by the amount of traffic they are accepting back. The word “Internet” is short for “internetworking.” What’s presented as a single network is in fact a collection of interconnected networks, each of which pay to send data to each other. This system of “the more you send, the more you pay” has been in place since the start of the commercial Internet. It’s called “peering”: If two companies are sending each other the same amount of data at an interconnection point, they are by definition “peers”. If one is sending a lot more, it has to pay more.

The commercial Internet has long had a “fast lane,” called a content-delivery network, where companies like Akamai and Limelight Networks have servers and data centers located in the same facilities as ISPs or close by. They pay the ISPs for a high level of peering connections and copy content to those colocated facilities. So when you are reading a New York Times article, or watching a YouTube video, chances are it is being served from an Akamai server very close to you, and the content provider is not paying to send the content from their server through their backbone links. This is cheaper for a media distributor since the CDN only has to pay for the uplink into your ISP or to colocate servers at your ISP, and is faster as well since it is not hopping across a bunch of networks.

The most interesting aspect of the Level 3 and Comcast fracas is that it is an attempt to use regulatory and fair-trade claims to change how the commercial Internet has worked to date. It is unlikely that the FCC or Federal Trade Commission will force ISPs to deliver an unlimited amount of data for free. What if Netflix was plugging directly into Comcast’s network? Wouldn’t they be expected to pay a connectivity fee like they are currently paying their backbone and CDN providers? Peering arrangements are the fabric of how the commercial Internet has operated, and it is unlikely that regulators will attempt to change this.

Netflix already accounts for an estimated 20 percent of primetime Internet traffic, a figure that is constantly growing. That company can easily switch to Akamai or Limelight which already have the infrastructure in place with ISPs like Comcast to delivery video streams. However, it is likely that regulators will force ISPs like Comcast, which also provide their own competing video streams and services, to offer CDNs reasonable and nondiscriminatory pricing for peering connections.

The FCC mandate requiring wireline ISPs not to discriminate will be pushed to the limits by multichannel video providers like Comcast and AT&T U-Verse, since it is a fundamental aspect of their operation to discriminate. A multichannel wire coming into your home might provide digital TV, digital telephone, and Internet data. But it’s not three different connections: It’s just one, with Comcast, AT&T, Time Warner, Verizon and the rest operating their networks to deliver a certain amount of bandwidth to each service.

As it stands right now, these providers secure video content licenses from firms like CBS and HBO and deliver it with dedicated bandwidth to proprietary cable boxes. It really is no different than Netflix licensing the same content, paying for connectivity with a CDN, and streaming it to a Roku box. But although both signals are coming across the same cable, for now everyone is committed to keeping them separate from a regulatory perspective.

As more and more video viewing shifts from cable television to Internet video, multichannel providers like Comcast and AT&T are very likely to want to shift dedicated bandwidth from the digital television portion of their networks to the Internet portion, and allow viewing of their licensed video content on Web browsers and Roku boxes in addition to proprietary cable boxes. Such a shift will likely cause a huge battle with net neutrality advocates and streaming competitors such as Netflix. It is not clear how the FCC and FTC will rule on this issue, and is very dependent on the upcoming government climate.

One option would be to force providers to lease dedicated bandwidth to video streaming competitors at reasonable and nondiscriminatory pricing, much like how in the early days of broadband phone companies were forced to lease their lines to competitive DSL providers. This would enable legacy providers such as Comcast and new entrants like Netflix to play on a relatively even field.

But as the heated discussion around net neutrality shows, there’s no guaranteed bandwidth for reason in this discussion.