With Schmidt out as CEO, Google can stop copying Microsoft

This post was also published in VentureBeat.There’s much to praise in departing Google CEO Eric Schmidt’s tenure. But if the stagnation of recent years can be pinned on one fault, it’s this: Schmidt’s Microsoft obsession.

Sure, Microsoft gets lots of flack for attempting to knock off Google’s Web search with Bing. But the truth is that under Schmidt’s stewardship, Google has been obsessed with replicating Microsoft products. Windows, Internet Explorer, Office, Exchange, and .Net? Chrome OS, Chrome Browser, Google Apps, and Google App Engine.

Ironically, when Schmidt first joined Google, he told John Battelle that he was looking forward to not competing with Microsoft, after being battered by Microsoft during his stints as CTO of Sun and CEO of Novell.

Schmidt leaves Google a healthy company. It has completely dominated search as a money-making business, even though the search product definitely is in the midst of a much-needed retooling. But now that Schmidt is moving on — Ken Auletta in the New Yorker suggests that the post as executive chairman is just a temporary gig before he leaves for good — can Google drop the so-last-century obsession with faded tech idea like operating systems and email? 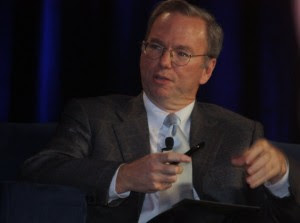 Schmidt’s Microsoft obession has some history, which I witnessed firsthand. Schmidt spent the formative years of his career at Sun Microsystems, a company whose very soul was combatting Microsoft. In 1998, a year after Schmidt left, I arrived at Sun when it acquired NetDynamics, one of the first application server companies, where I was CTO.

Back then Java was still new, e-commerce was still starting to scale, and there was no standard Java way to add data and logic to an HTML page. We went and met with the Java folks about it, and they told us they were going to create “Java Server Pages” or JSPs, a pretty hackneyed notation. “Why are you doing that instead of using XML?” I asked, referring to the Extensible Markup Language, a more fluid and up-to-date way of doing things that’s now a standard way of exchanging data. “Because that’s how Microsoft does it with Active Server Pages,” was the reply. I left the meeting thinking that these guys were insane. I soon learned that almost every division of Sun was trying to compete with Microsoft on Microsoft’s terms, from office productivity software to software servers to consumer operating systems.

After Sun, Schmidt was the CEO of Novell, and launched or acquired failed products such as SUSE Desktop Linux in an attempt to compete with Windows and the Mono project to replicate Microsoft .Net on Linux.

Schmidt claimed he’d learned from those experiences at Sun and Novell. But is it really that surprising that, once Google started gushing cash from its advertising business, that Schmidt used it to take on Microsoft yet again?

In the end, there is really no point of copying Microsoft on its own turf; as Schmidt has now found out three times, it is a lost cause. Google’s enterprise business — Google Apps and the like — have scored some wins, but are far from achieving Microsoft’s scale.

No wonder why: Imagine you are a typical business running Microsoft Outlook, Office, Exchange, SharePoint, .Net, and such. Google comes in and says, “We can rip some of this stuff out, it will be very painful to migrate your data, and you have to retrain all of your users.” And Microsoft comes in and says “we will migrate all of your servers to our cloud over the weekend, you guys can come back on Monday and everything will look exactly the same, except now it’s hosted and you can fire your IT department.” Which way do you think most businesses are going to go? It’s a nice business. It’s just not the future. Why bother competing for it?

Product companies have to be run by product people -– Steve Jobs at Apple, Larry Ellison at Oracle, Bill Gates during Microsoft’s heyday, Marc Benioff at Salesforce, and Mark Zuckerberg at Facebook. These guys know how to drive their companies into new products such as iPads, social advertising, and application platforms. To the extent that Schmidt, who shared power with cofounders Larry Page and Sergey Brin, was a product person, he was about last century’s products, not this one’s.

Here’s hoping Page, who came of age when Microsoft was already fading, is looking 10 years into the future, rather than 10 years into the past. Imagine if Google had put the same amount of energy into its Orkut social network (that launched weeks before Facebook in January 2004) that it put into Google Apps. Now that Google is back in the hands of its original product visionary, we will finally see what Google is really made of.