LinkedIn IPO: It’s only a bubble when Grandma can buy in

This post was also published in VentureBeat. LinkedIn’s massive 2x pop this morning when it went public reflects that everyone, including the underwriters, seriously underestimated the demand for the shares. There was a time, especially during the .com, when underwriters such as Morgan Stanley would attempt to artificially go out the door with a low price in order to create a pop, but companies going public nowadays are much more sophisticated and discerning about leaving so much money on the table.

So why is there so much pent up demand? It is not just, as Jim Kramer claims, the limited number of shares. Hot, second wave Internet companies are taking a long time to go public and the stock is only available to a select few. Only accredited investors could invest in hot Silicon Valley companies through secondary exchanges like SecondMarket. On top of that, early stage investors and management are much more patient due to the liquidity gained through secondary markets and the willingness of late stage investors like DST to buy out existing stockholders. 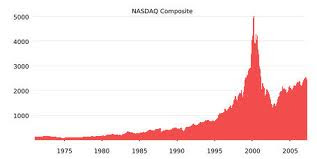 I have lived through two bubbles, the .com bubble and the housing bubble, and have concluded that bubbles are essentially giant pyramid schemes. And Grandma is at the bottom of the pyramid. It is a bad sign when unsophisticated Grandma starts investing her money in 1999 .com startups that she doesn’t understand and in 2008 investment property in Phoenix although she knows nothing about investment real estate. Yes, everyone else has made so much money and it is going up and up, and her financial advisors are telling her to take advantage of the opportunity. But after the unsophisticated investors like Grandma jump in, there is no one left for her to sell her stock to.

Grandma is the last stop of the gravy train.

We have felt the early signs of the bubble here in Silicon Valley, but the price of companies has been self-contained to the Bay Area. My company Webtrends decided to move to a different area of San Francisco from uberhip South Park because rents got too high. Engineers are demanding skyhigh salaries.

The key metric to watch is multiple on revenue. LinkedIn is valued at 36 times its 2010 revenues, which is a very high multiple. Contrast that to San Francisco-based RPX Corporation, which acquires patents on behalf of large companies to fend off patent trolls. RPX went public ten days ago and had a slight pop, and is now valued at $1.3 billion, ten times its 2010 revenues. Ten times revenue is generally considered a fantastic multiple, and well deserved for a company that is profitable and growing fast in a novel space such as patent protection.

Grandma is never going to hear about RPX. When the multiple on revenue spread between the LinkedIns of the world and the RPX’s of the world gets too crazy, you know the grandmas are all getting in and it is time to get out. In the mean time, numerous attractive young women are floating around South Park, a sight unseen since 1999, so enjoy it will it lasts!