The Coronacceleration: The move to digital money and digital gold, while Bitcoin tracks the stock market 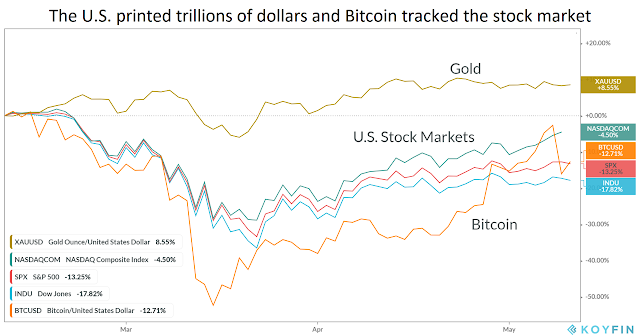 Bitcoin advocates have long claimed that Bitcoin was the ultimate hedge against fiat currencies printing unlimited amounts of money. We just experienced this scenario: the U.S. Federal Reserve is buying “unlimited” amounts of debt, and the U.S. Treasury is spiking its debt load to $25 trillion while promising to pay almost nothing in interest.

Bitcoin should be spiking relative to the U.S. Dollar due to the debasement of the world’s primary reserve currency. What has actually happened is that the stock market has risen, and Bitcoin has followed the stock market. Inflation increases asset prices and Bitcoin is clearly now a dollar-based asset, much like a tech stock. Especially over the past year, the same type of people that trade Bitcoin also trade tech stocks, and yesterday’s Bitcoin halving had the zeal of a tech stock split. It is now evident that printing tranches of fiat money also includes mining with an intensive legislative process, a quorum with a vote across two houses of Congress, followed by the proof of work of a Congressional bill.

Gold, the traditional bellwether against currency debasement, has outperformed both the stock market and Bitcoin. Ironically for cryptocurrencies based on increasingly difficult mining, stocks in gold mines that can mine even more gold have really spiked during the Coronavirus-induced market turmoil, with Barrick Gold Corp (NYSE:GOLD) up over 50% in the past three months.

If not “traditional” cryptocurrencies, what will become our future in digital money? Right now, banks keep databases that track your digital money, but soon enough, it will be governments themselves. The U.S. was already trending towards contactless and digital payments, making cash a thing of the past, but now, due to COVID-19, that trend has accelerated. With Coronavirus, nobody wants to handle cash or even hand a credit card to a clerk. Even the U.S. Congress was flirting with “digital dollars” in the latest stimulus bill.

An axis of U.S.-sanctioned countries led by Russia and China have for years attempted to escape the orbit of the U.S. dollar and the SWIFT banking system. Both Russia and China have experimented with digital currencies. However, outside of their respective economies, nobody wants a wallet full of Rubles or Yuan.

Over the past decade, Russia and China have both been stocking up their gold reserves while minimizing their U.S. Treasury holdings. China’s Shanghai Gold Exchange is now the world’s largest gold exchange and China mines 11% of the world’s gold.

Free-floating currencies are based on faith. There is faith that the U.S. government will pay back its loans even if there is rampant inflation because “there is no alternative” (an acronym known as TINA) to the dollar. Dollar-based instruments like the U.S. stock markets will price in that inflation. Bitcoin is apparently another dollar-based instrument that is also pricing in that inflation. Even Facebook’s much-maligned Libra initiative is moving to currency-based stablecoins.

In the end, gold-backed cryptocurrency is turning out to be the fiat currency hedge rather than Bitcoin which tried to digitally mimic gold mining. This is an ironic twist just 50 years after the U.S. left the Bretton Woods gold standard in 1971. In the meantime, wipe your butt with dollar bills and hide the toilet paper under the bed!