Ariana Huffington is right, and Rupert Murdoch is wrong

This post was also published in VentureBeat. In the past week, we saw two moguls splash out big money on online content. News Corp. CEO Rupert Murdoch revealed he’d invested $30 million so far in developing The Daily, a subscription-only magazine for the iPad. And AOL CEO Tim Armstrong plunked down $315 million for Arianna Huffington’s Huffington Post.

What a contrast on the day of the Super Bowl: Murdoch (pictured left) took out a big-bucks television ad for The Daily during the football game (admittedly on his own Fox network, so he probably gave himself a discount). Meanwhile, Huffington (pictured right) and Armstrong got priceless free publicity as news of their deal roiled the Internet.

Could you ask for a better example of the difference in mindset between old media and new media? Take the top-down, orchestrated launch of The Daily. The reality didn’t match the fanfare: Short of must-read articles and clumsily walled off from search traffic and social media, The Daily — essentially a glossy magazine produced on a daily schedule — is the wrong product for the media future.

The reality is that people are not reading magazines because they are magazines, not because they are on paper. What people are reading is online media, whether you call it a blog, a website, or “content.” You are Robert Murdoch’s problem, since you are reading this right now online, and not tomorrow in the Wall Street Journal — another Murdoch property — or in “The Daily” on your iPad.

Clearly old media does not get this blog thing, and as the saying goes, in the land of the blind, the one-eyed man is king. While a lot of folks have counted AOL out, under CEO Tim Armstrong’s leadership AOL is becoming the top new media destination. The Huffington Post acquisition comes on the heels of its acquisition of the popular technology blog TechCrunch, and adds to a vast stable of popular sites ranging from BloggingStocks to PopEater. 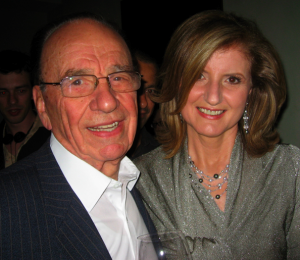 What is unique about the Huffington Post is that it is that is has massive scale — 40 million monthly uniques — and is segmented across numerous verticals such as news, style, business, media, and even divorce. These high-traffic verticals will bring tremendous scale to AOL’s advertising sales, as an ad unit can now be bought for The Huffington Post’s style and living sections, as well as, say, PopEater. All of a sudden, PopEater ad units are worth a lot more since they are part of an AOL-Huffington Post “lifestyle” ad package. In addition, the Huffington Post brings a well known brand under the AOL umbrella that, love it or hate it, actually means something.

The other thing a combined AOL-Huffington Post has going for it is talent. After having not run into AOL people in almost a decade, over the past few six months I find myself interacting again and again with smart, talented folks at AOL. At Transpond, the social marketing company we sold to Webtrends, my current employer, we did social media campaigns for AOL properties last summer. At the AOL campus in Dulles, I ran into an old friend who just moved there from Silicon Valley to run a division. After launching PostPost, a social newspaper that is a side project of mine, I got a call from a smart guy who just started running AOL News to talk about how social feeds are affecting news. Why are all these people going to AOL all of a sudden?

One name: Tim Armstrong. Armstrong, Google’s former head of sales, joined AOL as its CEO and put in place the verticalized content strategy. Armstrong is based in New York and knows the media industry well, and is attracting very strong talent in advertising product development as well as content.

For example, AOL’s Project Devil real-time ad units are very compelling to advertisers, equaled only by WidgetBox’s specialized ad units. It recently acquired Pictela which makes it easy for advertisers to syndicate content through ads. These guys are on fire.

Contrast Murdoch’s pick as editor of The Daily: Jesse Angelo. If you’re outside of the New York media bubble, you’re probably asking yourself: Who? Though young, he’s a News Corp. lifer, steeped in the print world and his company’s peculiar rituals of catering to its quirky, newspaper-loving CEO.

Compare that to Armstrong’s hiring-through-acquisition of Arianna Huffington, a global media brand and a mogul who can now go head-to-head with Murdoch himself.

And Murdoch’s iPad efforts? Well, AOL is launching with Editions, an iPad magazine which will automatically pick the best of all AOL’s content for you. Now add all of the Huffington Post’s output to that, and you’ve got the real tablet newspaper. This is in stark contrast to the The Daily magazine, a paid app for subscribers only.

The editorially curated content of The Daily and its ilk on the iPad will lose in a competition to blogs just like their Web analogs already do. AOL can feed all of its interesting content with personalization into its Editions iPad app and come out on top. For that matter, the Huffington Post has over 40 million uniques, is updated constantly, and already comes in an iPad-friendly mobile format. Which iPad “magazine” do you think the next generation of readers will flock to? The Huffington Post, now a familiar online brand, for free, or the as-yet-unknown Daily for $40 a year?

AOL has a ton of upside. It is currently valued at $2.3 billion, and $1 billion of the valuation is arguably based on its legacy dialup business. So its content business, in Huffington’s hands, is really only currently worth $1.3 billion. Wall Street is tough when a company sheds legacy revenue as it builds new revenue streams, or as Henry Blodget so eloquently put it, “crapped the bed for two quaerters in a row.”

But Wall Street should also respect comparables. Even though it declined, AOL’s quarterly ad revenue is $331 million. Demand Media recently went public and is valued at $1.6 billion on quarterly revenues of $65 million, so roughly the same valuation for a fifth of the revenue. There is no question that AOL has far better content than Demand’s content farms, which pay freelancers low rates for basic how-tos and other easily churned-out content. With the addition the Huffington Post, AOL will attract more large, premium advertisers.

What next? Let’s assume that AOL can’t or won’t buy the likes of Gawker Media or the Drudge Report. (Huffington has built a bigger and more “civil” — read: “advertiser-friendly” — version of both of those websites.) Given Armstrong and Huffington’s emphasis on reaching women online, logical targets include Sugar Inc. and Glam Media.

But even without bulking up further and just building atop the Huffington Post, AOL could be the tech company turnaround story of the 2010s, on par with IBM in the 1990s and Apple in the 2000s. Watching them crush the failing efforts of old-media brands to adapt to the world of iPad will just be the cherry on top.

Maybe Murdoch should have taken Huffington up on the chance to blog for her.