Interactive TV has finally happened - just not on TVs

This post was also published in VentureBeat.Ever since Yahoo Connected TV launched at CES in 2009, there has been a steady stream of TV app platform launches, including Google TV, Samsung, Broadcom/Adobe, Boxee, Blu-ray players, MythTV, and even Microsoft Xbox. However, there haven’t been any breakout apps for Internet-connected TVs — so-called “smart TVs.”

And the dirty secret? The TV apps out there are rarely used. I know this first-hand: At Transpond, the social apps-developer I founded and sold to Webtrends last summer, we made a couple of connected-television apps for one of the major broadcast networks, and the apps had almost no traction.

So what happened? It’s pretty simple. TV apps are cumbersome and awkward to use. Using a remote control to navigate across a bunch of app features is slow and confusing. In the process, you annoy everyone else watching the TV. This is the reason that Apple is not supporting apps on the Apple TV, even though it is essentially an iPod Touch with an HDMI port instead of a touchscreen. Games are the only apps that people want to run on a big screen, and they usually want to run highly interactive, multilayer games that are well beyond the capabilities of connected televisions. In addition, delivering TV apps required implementing a ragtag assortment of quirky APIs from players ranging from Yahoo Widgets to proprietary offerings from Blu-ray manufacturers.

Instead, people are using their smartphones, tablets, and notebook computers for all of the much-ballyhooed interactive TV scenarios. Who’s that actress on Entourage? Let’s look it up on IMDB. What’s that song at the beginning of Gossip Girl? Let’s Shazam it. What are people saying about this episode of Glee? Let’s search Twitter for #Glee. Even the onscreen guide, the one staple interactive unit that you’d expect to run on the TV screen, is moving to your palm, with apps such as the Comcast’s Xfinity Remote iPad app that lets viewers browse TV listings and even program their DVR. 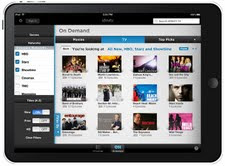 There is an entire category of TV engagement apps emerging on mobile devices. ABC and Fox have launched iPad apps that can identify what TV show you are watching, using audio soundprinting technology from Nielsen that works like Shazam but for TV shows, and offer up options to interact with the show. GetClue lets viewers “check in” to TV shows and offers a recommendation service based on people’s expressed preferences.

The only popular connected-TV apps are the ones that let you select video and audio content on demand, such as Netflix, Amazon Video on Demand, and Pandora. Even these apps are now being replaced with a new generation of mobile devices that can transmit what they are playing onto television screens. Much like using the iOS Remote app to play iTunes music on a stereo with an AirPort Express, Apple’s AirPlay will stream video from any iOS device to a TV with an Apple TV set-top installed.

It is not a huge leap to assume that Google will iterate on its failed Google TV launch and make it so that Android devices can easily stream video to TVs. Vizio already announced at CES last month that their new tablets will be able to seamlessly hand video streams over to Vizio TVs. Even Intel got in the game at CES, and launched WiDi 2.0 which will enable mobile devices and notebooks to stream full 1080p HD video to any TV with a WiDi adapter.

With flat panels relatively commoditized, TV manufacturers attempted to differentiate with connected-TV features and 3D. However, the market has moved and the real differentiation is offering interactive features in the remote control. When the core differentiator for TVs becomes the controller you hold in your hand, Apple becomes a very scary competitor — and Google looks more like a friend. TV manufacturers should seriously consider bundling Android-based controllers that can run engagement apps and transfer streams to their large screens. It’s either that, or watch their customers change the channel once and for all.